BOOK: Its translation into English was a success among readers and critics. Now the book comes back in a new Italian edition. Mario Geymonat’s The Great Archimedes, a Corrado Alvaro Award winner, draws a portrait of the first conscious interpreter of the creative intelligence, «one of the most original and prolific scientists of all human history», according to the Nobel Prize Winner Alferov. Archimede’s genius made the following crucial discoveries: from the Greek Pi solution to the myth of burning mirrors, thanks to which Syracuse damaged the Roman fleet. Combining the analysis of sources and the suggestive funny stories, mixing up the truth and the legend, Geymonat uses biography as a genre in order to show Archimede’s originality and his unwavering vocation that allowed him to pay his tribute to the civilization progress. Completed with a writing by Piergiorgio Odifreddi and with a lot of pictures, The Great Archimedes is already a classical book to be promoted among scientists and science lovers.

АUTHOR:  Philologist and Latin studies researcher, Mario Geymonat was a professor of different Universities. He was the author of plenty critical editions including the one dedicated to the poet Virgil. He wrote numerous essays that appear on the pages of Italian and international magazines. He published a Veronese Palimpsest of Euclides in Latin (Milan, 1964) and Scholia in Nicandri Alexipharmaca (Milan, 1974).

An Italian classicist Mario Geymonat walks on the edge between historic truth and a legend depicting Archimedes as a genial and extraordinary scientist.

Geymonat makes a revival of Archimedes’ discoveries, of his life and passion for civil and political problems.

A book which is, at the same time, instructive and extraordinarily pleasant to be read. 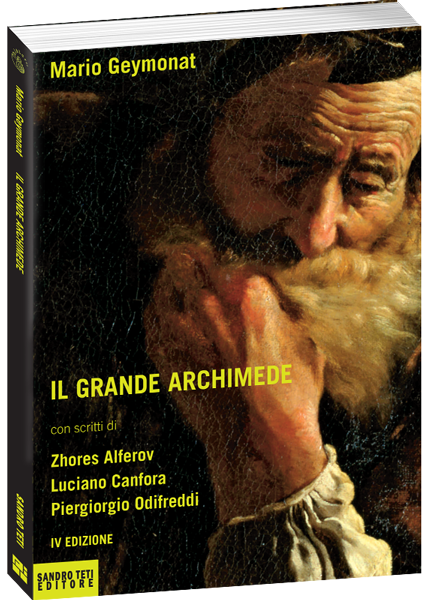