Nicolai Lilin, Giulietto Chiesa, Lucio Caracciolo, Carlo Freccero, Aldo Ferrari, Franco Cardini, Fausto Biloslavo, Paolo Calzini, Stefano Bruno Galli, Maurizio Carta give way to their authoritative opinions expressed on the occasion of the Ukrainian crisis. It is an efficient chronicle of the events necessary to understand the evolution of the present conflict.

BOOK: An unconventional point of view on the Ukrainian crisis. Geopolitics, communication, history, journalism, law, international relationships: different sides of a dispute that brought Kiev to run off the rails of the past. Ten famous authors clear up every aspect of the convulsions of a country plunged into chaos: civil citizens elimination, role of the United States of America and of the European Community, propaganda arsenals,  attitude of Russia, involvement  of domestic and foreign extreme right force in the events, Russian annexation of Crimea, war in the eastern regions.

SUPERVISORS: Maurizio Carta is a journalist and an expert on Russia. He writes on the Ukrainian history on the pages of Limes (The original sin of Kiev).
Sandro Teti is a publisher, political analyst, professional journalist, expert on the ex-USSR area and international relationships. In 2013 he publishes a book-investigation Julija Tymošenko, la conquista dell’Ucraina. Besides, Sandro Teti is the author of essays and articles on the pages of national and foreign press. He spends long periods of his life first in the Soviet Union, then in the Russian Federation. He published the magazine Il Calendario del popolo, founded in 1945. 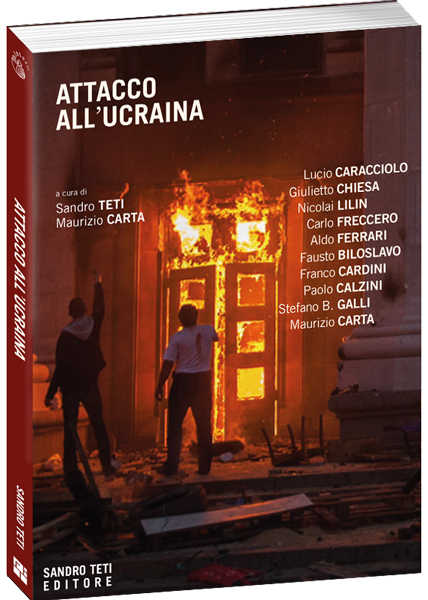